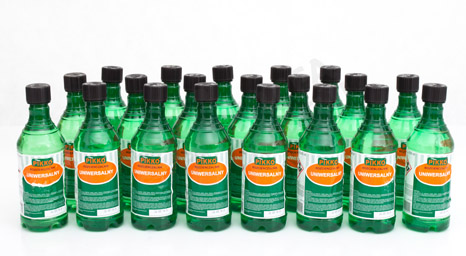 Many cleaners contain solvents. One of them is e.g.. terpentyna: dissolves paints and fats. Water is also a solvent, but unfortunately most other solvents are flammable and poisonous.

After treating clothes with solvents, and before throwing it into the washing machine, you have to hang it outside - away from children and pets - for the solvent to air out.

Clothes cleaned with solvents should dry completely, before wearing it. Some people are extremely sensitive to solvents, such as crude oil distillation products.

When in doubt, can the stain be removed at home, do you need to buy some special solvent, better to take the item to dry cleaning. Incorrect use of solvents can damage the fabric and make it even more dirty. Some solvents discolor the material, they dissolve the impregnation or simply have a detrimental effect on the material itself.

Dry cleaning fluids remove most greasy stains. They are used in small amounts and the entire operation is repeated several times, which gives a much better effect than a one-time heavy pouring on the stain.
The dirty place should be spread out on a rolled up towel, soiled side down, so that the stain is washed from the fabric. When the towel gets dirty, we move the fabric to the new place of the towel, so that it does not get dirty again.

Warning
Before working with solvents, remove contact lenses, as solvent particles can get between the lens and the globe of the eye.

Precautions: Solvent vapors are toxic, and their effects accumulate in the body, especially when the person has been drinking alcohol (it increases the toxicity of solvents). Some solvents are flammable, so you must not use them near an open flame and do not smoke tobacco. The room must be well ventilated. Avoid inhaling vapors.