These are bleaching agents that are less effective than oxidants. When they affect the dye in the fabric, colorless compounds are formed as a result of reducing processes. Final rinsing with water only partially launches these compounds. So it can happen, that as a result of the action of oxygen in the air the dye will be re-formed or the discolored surface will turn yellow. This is the disadvantage of reducing agents. The most important reducing agents include the salts of sulfuric acid - sulphites which release sulfur dioxide. 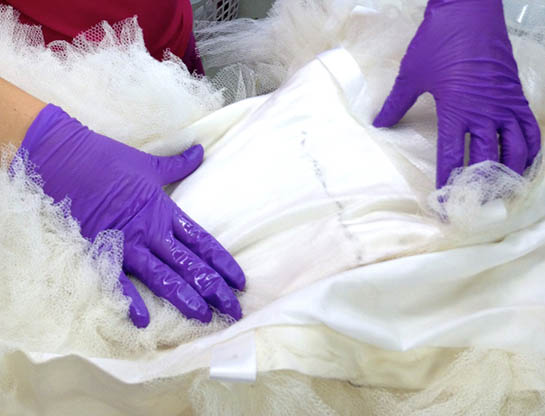 The most famous is sodium sulphite Na2SO3 and sodium acid sulfite, NaHSO3. Both of these salts give off sulfur dioxide (the action of air is enough). They are used as bleaching agents for fabrics made of animal fibers, i.e.. made of wool and natural silk and fabrics of plant fibers - cotton and linen. Braunstein can also be removed using sodium acid sulphite (pyrolusite), which is formed when bleaching with potassium permanganate. The prolonged action of these two salts on human skin is detrimental, therefore, after using them, wash your hands thoroughly with soap and lubricate them with cream. The preparations offered by trade are undoubtedly much more convenient to use, called decolorizers. Bleaching chemicals listed, and so: hydrogen peroxide, potassium permanganate, bleach solutions and sulphites can be purchased from specialist stores.

A few more notes on optical brighteners: every housewife knows well the "paint" used for a long time in the so-called. great wash. It is a blue dye - ultramarine, once sold in small handbags. This dye was dissolved in water when rinsing the linen. The effect of this treatment was optical, for blue is a color that complements yellow, and therefore takes away yellowness. As a result of the "dye", the yellow shade of dry linen becomes invisible. Currently, stains are not used. For many years, the problem of the yellowish tinge of linen has been solved in a different way. Already 1937 r. a dye under the name Ultralin was patented in Switzerland and Austria, introducing it to the market as the so-called. optical brightener. Ultralin is fluorescent in light containing ultraviolet rays, a więc np.’ świeci w świetle dziennym. The phenomenon is explained by this, that the invisible ultraviolet rays transform into visible blue and violet rays. The yellowish tinge is thus compensated by blue fluorescence and the underwear acquires a beautiful shade of white thanks to optical brightener.. Currently, preparations can be purchased in specialist stores, which are added directly to the water, in which we rinse the underwear (Blanka-blin, Ultraflex, Sonnenklar linen whitening tablets, INCO bleach etc.).