Bleaching is to break down the dye or make the dye a colorless compound. Bleaching is used during washing or stain removal in order to give the linen the desired shade of pure white or to remove colored stains.. However, whitening is also performed for a different purpose, namely - in the case of washing linen - disinfection (e.g.. when washing linen of sick people). 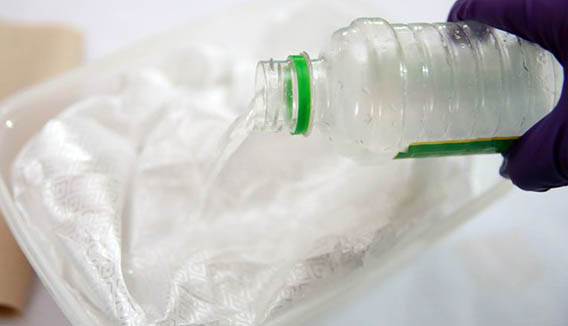 In practice, bleaching and decolorization are then used, when the color of the garment intended for re-discoloration is so weak, that it can be evenly covered with a new dye of a tone darker than the original one.

Chemicals used in bleaching and discoloration are oxidizing or reducing. In addition, special measures are also used to change only the physical properties of the surface of the product, the so-called. optical brighteners, which are components of washing and bleaching agents.

Keep in mind when using oxidizers, that as a result of longer or more intense action of the oxidant, damage to the fibers of the fabric may occur. For example, cotton fabric rots and can even break up; the so-called. hydroxycellulose. This fact should be given special attention, because it is widely accepted, that oxygen and oxidative bleaching agents are completely harmless.

The oldest method of bleaching is "meadow bleaching" , moreover, they are still used in the countryside to whiten white linen, especially linen. For this purpose, freshly washed, The still wet fabric is placed on the meadow and exposed to sunlight, under the action of which actively bleaching compounds of hydrogen peroxide and ozone are formed. To avoid damage, the fabric should be moistened several times with water during bleaching, because this method causes an even distribution and dilution of the concentrated bleaching agents in this case. Thus, and "meadow bleaching" can be detrimental to the fabric, if it takes too long or then, when it is used too often.

Bleaching damage is much more common in general, than you might imagine. High levels of oxygen endanger fabrics made of cellulose fibers, i.e.. made of cotton, flax, viscose fibers, causing e.g.. butwienie firanek. In this case, the same factors are at work, what about "meadow whitewashing". Even Dederon and rayon rayon are damaged by the process of oxidation by sunlight (e.g.. damage to beach clothing). The action of residual chemicals is also dangerous, left in the fabric after washing or stain removal. They can act catalytically and promote the degradation of the fabric. The most important oxidative bleaches are described below, used in the household.